Kedaar gave me a very delightful surprise yesterday. As is he is not a very organized boy at home. Though he apparently does everything correctly in school when it comes to hanging jackets, putting toys back in their place etc, he doesnt demonstrate the same things at home. Yesterday night, I just asked him to keep the book we got from library in a bag as they are lying down on the floor. I told him this when i was in kitchen and after few minutes he called me saying 'mamma, see, what I did, I made the house clean'. To my surprise he put all the books in teh bag, put the bag on his study table, also cleaned up a bunch of toys from the floor.
When I came to see this, he found a small paper on the floor. He took that also and ran to dustbin and proudly said 'see, I made it so beautiful'.
It was really delighting to see that kind of thing from what, something I always wanted my kid to have (being organized :)).
Hope he continues this on regular basis than giving me occassional surprises :)
Posted for Kedaar Nandan at 7:20 PM No comments: 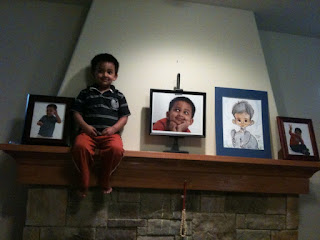 Posted for Kedaar Nandan at 11:03 PM No comments: 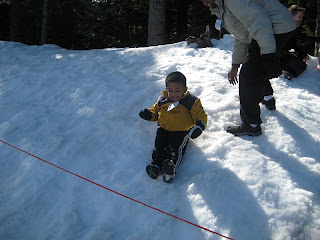 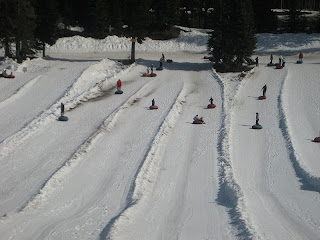 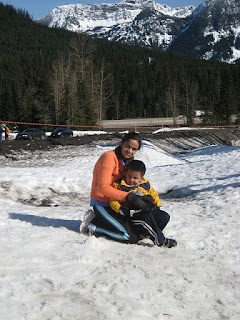 Some time in the last month, we went to snow tubing near Snowqualmie. This was the same place we went last year as well but this time the place was fairly sunny and much more enjoyable.
Kedaar had lot of fun while going down the snow and the coming up on through the rope.
Here are some pictures

Posted for Kedaar Nandan at 4:24 PM No comments:

During dinner time yesterday, Kedaar asked me to put video of the horse, fox story.
It is a story from Panchatantra. I knew what he wants but didnt want to put TV during his dinner time ( because he is highly addicted to watching TV during dinner time and I want to change this habit) So I started to act asking some stupid questions like "do you want the story where tom & jerry go on horse", " do you want the story where you saw a fox in park" etc. He patiently said "no" to all my stupd questions. At some point, I think he got frustrated and said "mamma, no, its not that, wear your thinking hat and then you will remember". I was surprised. I asked "how do you wear thinking hat", he enacted putting something on my head and said "this is how you do it". Later he told us that Ms.Indu tells the kids to do so if they make obvious mistakes, forget something etc.
This is just one of the several titbits of knowledge he keeps learning at school. The part I am impressed is his ability to apply those things at home when needed :)
Posted for Kedaar Nandan at 10:04 AM No comments:

We went to a music show by a group called "AllGoRythms" in Seattle.
Kedaar's friend Atharva's mom is singing in that show and we came to know about the show through her. It was a nice show. Kedaar listened to each and every song carefuly for the whole first half. Even when his dad wanted to take him outside for a break, he just ran back into seat saying he wants to listen to 'music".
In the dinner break time, the much awaited thing happened. Kedaar found his friend Atharva and Atharva's dad said Atharva has also been looking for Kedaar and they both can sit together for the second part of the show. The second part of the show was full of masti, dance type of songs. Kedaar and Atharva started having fun, playing in the seats. Eventually they convinced me, Chandra to go near the stage because Atharva's 2 other friends also came and these 2 can play with them. After that, all of them started running around, playing, crawling onto stage, dancing for songs, oh, they just had a blast for almost 2 hrs. Chandra dedicated a song "mastkalandar" for them and both Kedaar, Atharva are excited to hear their names on mike.
Overall, that was a fun blast for the kids and a nice break for mom and dad.
Posted for Kedaar Nandan at 4:51 PM No comments:

Rock in ear: Last week when we were coming home from school, Kedaar said “mommy, I have a rock in my ear”. I asked him if he has really rock in his ear and he said “yes”. Chandra &I were talking about something else during that time and I didn’t pay that much attention to it. In the evening, Kedaar did everything normally, had dinner. When he was just about to sleep, he said again that he has rock in ear. This time we took it seriously. He didn’t allow us to even touch the ear. We saw inside his in ear with torchlight and to the biggest surprise for us , there is really a small stone stuck in his ear. We turned him that side and tried to get it down, but it doesn’t come out. That was really a scary thing. Immediately we took him to emergency in Swedish. Doctor tried to pick it up with small vacuum and it never came out. Finally doctor had to numb his ear little bit, pour some water into his ear, used a sharp needle type of thing to push the stone from back. He said it is very common for kids to put rocks in ears  After some effort, the stone came out. When we enquired, it seems Kedaar said that he did it when he was in playground and told us hundred times that he will not do it again because doctor uncle will “poke” him. He also started repeating the process of taking out rocks from ear on us as part of his favorite “doctor” game.

Knee scratch: Another thing happened today. Kedaar had his pant torn at the knee when we went to pick him up! His teacher said that they just came from playground and he fell while running. Pant was torn and he has a fairly big scratch with some blood there. The teacher cleaned and put bandage on it. Kedaar had some more pain with it after he came home. He said it happened when he was running superfast in playground.

As usual I told the lessons of why he should not run fast, why he should not put bad things in ear, nose and eyes. He listened to it, he repeated what I said, but then we know that it will not stop. We just have to be prepared for such things as he is growing up.
Posted for Kedaar Nandan at 6:00 AM 1 comment:

Posted for Kedaar Nandan at 10:54 PM No comments: